Shinbone Alley is an area of Banyula Forest alongside the South Creek near its confluence with the Murray River immediately upstream of the Echuca-Moama Bridge. This bushland was once home to hundreds of people. But traces of settlement are not evident and bushland has re-established itself. The area is part of the Echuca Historic Features Reserve.

History
South Creek is a short intermittent stream which fliows into the Murray River at Echuca, a short distance upstream of the Echuca-Moama Bridge.
From the 1860s, a number of shacks were constructed alongside South Creek on land that was slightly higher than the surrounding flood plain but which, nevertheless, was subject to
occasional inundation. The ridge was known as Shinbone Alley ~ not because it was near abbatoirs or because it was near tanneries (Emu Tannery and W and T Cooper, Tanners), but because of the shape of this section of flood plain.

The area known as Shinbone Alley is some four to five acres near the western edge of Banyula Forest and bounded by Pakenham Street (to the north), Moama Street (to the west),
Bynan Street (to the east) and Goulburn Road (to the south).
When in 1854 Philip Chauncey, district surveyor of the Heathcote region mapped an area for a township, he named the area Boneyala but by 1880 the area was known as Banyula.
Perhaps the name came from an aboriginal word for many trees, Banyul. As nearby Echuca and Moama, its twin across the Murray River, grew, Banyula (Shinbone
Alley) could be regarded as a suburb.Echuca and Moama depended upon the river trade and timber mills for their existence. Banyula supported noxious industries such as abbatoirs and
tanneries. Many of the workers and poorer residents lived along Shinbone Alley. Wealthier families tended to live on higher ground downstream of the Echuca-Moama Bridge (built as a
railway bridge and finished in 1878 but now used by vehicles).

Henry Binks, the great grandfather of an Echuca Landcare and former Historical Society member, Michele Dixon, constructed a dwelling on Shinbone Alley in 1861. His shack was the
second to be constructed on the ridge, alongside the creek. Henry Binks left for the Bendigo goldfields in the 1850s, leaving his wife Eliza and two children behind. Originally a one-
roomed shack, the house was added to over the years. By the 1880s, there were about 12 houses on the ridge, all of them basic dwellings. Most residents of this flood-prone area were poor workers of the timber and tanning industries and their families.

During the depression of the 1930s, Shinbone Alley was home to the less fortunate, many of whom subsisted on local fish and the vegetables grown here. Many shared a corrugated iron
shed. Several hundred people now resided along Shinbone Alley and on the surrounding flood plain of Banyula.
After World War One, Shinbone again attracted many itinerants, swagmen, gypsies and the footloose.
Michele grew up in the house on Shinbone Alley. Eliza's daughter Annie ~ Michele's grandmaother ~ still lived in the house. Annie sometimes took in boarders and grew vegetables to help make ends meet.

Floods and droughts prevailed. Over the years, it was the higher parts of Echuca and Moama that survived best and supported most of the town&#39;s population. It was hard to obtain a
freehold title along Shinbone Alley and services such as sewage were lacking. The main centre of Moama moved to Meninya Street. The houses in Banyula Forest, including Shinbone
Alley, were gradually abandoned. The last house on Shinbone Alley was abandoned by 1972 and demolished. Echuca grew to the south and west and today supports over 12,000 people.
Moama is growing to the north and west. Banyula Forest, bushland downstream of the bridge and the Murray River separate Echuca and Moama.

Today, virtually no trace remains of the settlement of Banyula. There are a few pieces of broken china and a hint of a clearing which was once a football oval. Indigenous vegetation has grown back: Black Box, Dwarf Cherry, Gold-dust Wattle, Cassinia, Silver Wattle, Flax Lilly (Dianella) and A variety of native grasses.
One of the early residents was related to musician John Butler. In the TV series "Who Do You Think You Are?" John Butler ends up in Bulgaria, via Fremantle, Castlemaine and Shinbone
Alley, Echuca. In the gold rush years, John Butler's great-great-great grandmother Elizabeth Ann lived in Shinbone Alley.
Documents held at the Echuca Regional Library and by the Echuca Historic Society include maps from the 1890s and 1950s which provide clear identification of the sites and their
ownership (99 year leases?). There is also a significant photographic record of the area and its inhabitants.

In 2011, the Echuca Historical Society Inc. produced a booklet "A Walk Thorugh Banyule Forest" which was written by Bronwen Quill and which contains images provided by Michele
Dixon. The name Banyule is sometimes used by locals rather than the name Banyula, the name used on most maps. The Historical Society chose to use the word Banyule in the title of
the booklet. The booklet outlines the sites of some of the buildings which once existed in Banyula Forest and along Shinbone Alley, including the site of the the Binks house.
A self-guiding walk brochure has already been produced by the Echuca Historical Society Inc.

Campaspe Shire has constructed a wooden walkway from near the Information Centre under the Echuca-Moama Bridge into Banyula Forest. To visit Shinbone, leave the wooden walkway
once under the bridge and walk toward the Murray River on a narrow foot track. 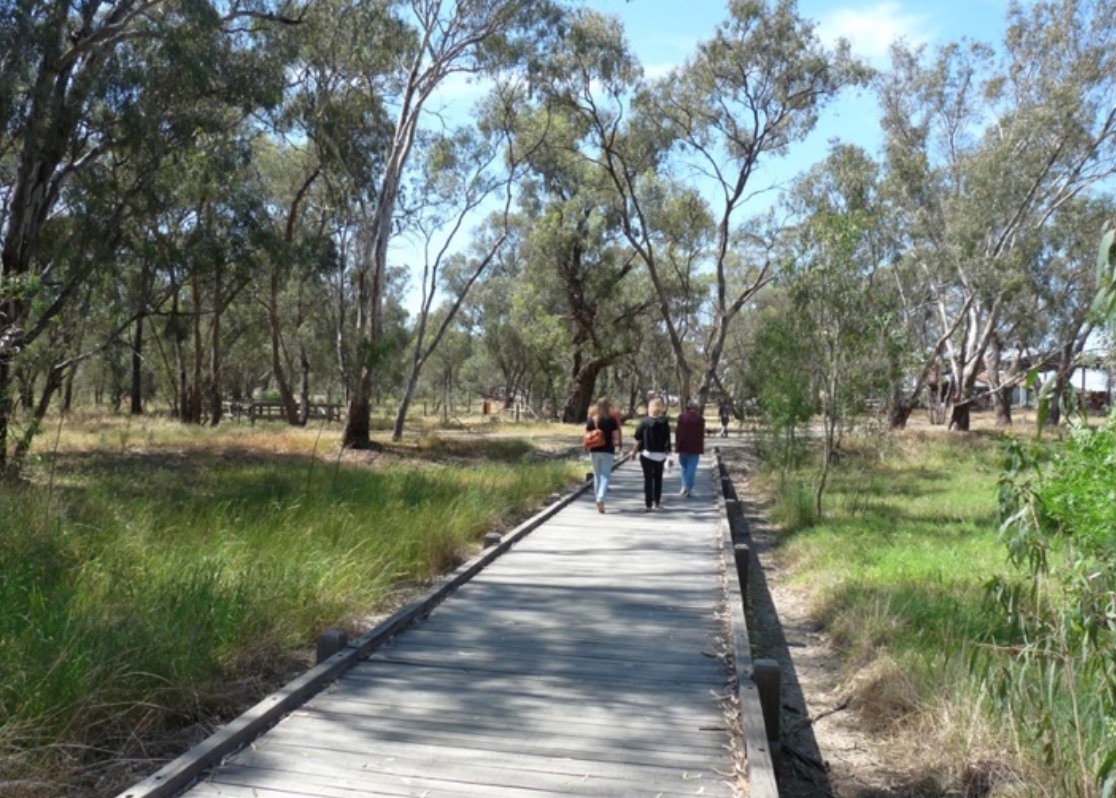 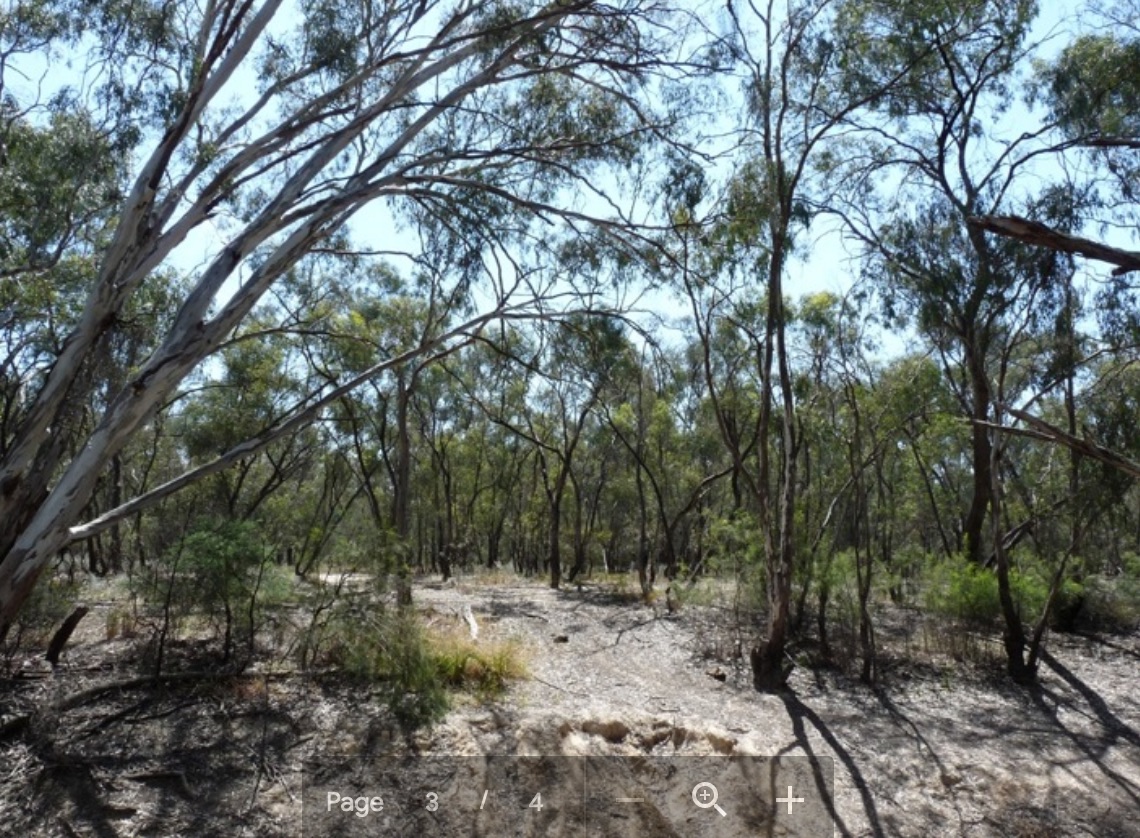 Today, bushland has re-established itself on Shinbone Alley (K Stockwell)

Links to sites about Shinbone Alley
Interview with Francis McKenner about Shinbone Alley and growing up in Echuca (National Library of Australia
recording) Echuca Historical Society at 1 Dickson Street Echuca has a copy of this interview.
Publication History of Echuca-Moama by Helen Coulson