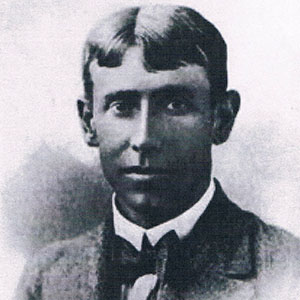 The deep brown Murray waters glide
Echuca way –
They sweep and swirl and roll and slide
Like turning wheels that ever pray;
And as they roll the shadows say
“So long, Echuca, so long, you
Loveliest port the steamers knew.”

When there are turning wheels afloat
Echuca way,
Each steamer-whistle had its note –
Defiant, sweet or sad or gay -
Off old Campaspe they would say,
“Hullo, Echuca, hullo you
Old port whose welcome’s always true.”

From western rivers far they came
Echuca way....
The dark trees saw their funnels’ flame;
By rocky reef or billabong,
The old moon heard the steamers’ song.
“Hullo, Echuca, hullo, you
Happiest port we ever knew”

This article was published in Australian Dictionary of Biography, Volume 10, (MUP), 1986

William (Will) Lawson (1876-1957), author, was born on 2 September 1876 at Low Fell, Gateshead, Durham, England, second son of Nicholas Lawson, chemical agent, and his wife Emma Jane, née Ridley. In 1880 the Lawsons migrated to New Zealand. His father joined the New Zealand Insurance Co. and in 1884 was transferred to Brisbane. Here Will completed his education at Brisbane Grammar School. After his family returned to New Zealand in 1892, he worked briefly as a clerk in the Wellington office of the Union Steamship Co. of New Zealand; then, at his father's insistence, he transferred to the local branch of the Australian Mutual Provident Society, where he remained for the next eighteen years.

Inspired by Henry Lawson's poetry, Lawson began to write ballads on sea and railway subjects; 'Stokin' was published in the Sydney Bulletin on 7 July 1900, signed 'Quilp N'. His first collection of verse, The Red West Road, appeared in Wellington in 1903. On 22 August 1905 at Johnsonville Lawson married Vera Willis; they had no children.

In 1912 Lawson moved to Sydney to work on the Evening News. He continued to publish in the Bulletin and the Lone Hand, and met many of their writers and artists. During World War I, medically unfit for active service, he returned to New Zealand to write for various newspapers. After the war he worked as a publicity officer and compiled tourist guides. One of his clients was Smith's Weekly and in 1923 he joined its staff in Sydney. Over the following decade Lawson alternated between Sydney and New Zealand, working as a journalist, publicist and travel agent. He also toured extensively in the United States of America and East Asia.

Will Lawson's first novel, The Laughing Buccaneer (Sydney, 1935), was, he claimed, written in six weeks because he was 'broke'. Like many of his sixteen published novels, it is a historical romance, set at the time of 'Bully' Hayes. The best of these, When Cobb and Co. was King (Sydney, 1936), has plenty of excitement and romance and less of Lawson's typical clichéd plotting and writing. After becoming a freelance author, he aimed to write at least two books a year, publishing five in 1945. Lawson produced seven volumes of verse, four non-fictional works and numerous uncollected poems, short stories and articles; he also 'specialized in railroad stories'.

In 1938 Lawson was granted a Commonwealth literary pension of £26 a year; by 1952 it had been increased to £208. He was an active member and sometime State secretary of the Fellowship of Australian Writers, which in May 1952 held a special meeting in his honour. Hazel-eyed, he had 'a craggy face, a strong beak of a nose, large ears and thick untidy hair'. For much of his life he was a heavy drinker and 'awkward in his cups'. In 1942 his wife left him and returned to New Zealand. His good angel, as he wrote in his unpublished autobiography, was Henry Lawson's widow Bertha, who 'saved me from the grog'. Together they wrote My Henry Lawson (Sydney, 1943).

On 11th April 1946 the local newspaper “Riverine Herald reported that Will and Bertha (Mrs Henry Lawson) were visiting Echuca and staying at the Palace Hotel. Both were interested in the Murray and it’s grand old history.

Lawson lived with her at Northbridge until her death in 1957. He died a few months later, on 13 October, in the home of the Little Sisters of the Poor, Randwick, and was buried in the Catholic section of Botany cemetery.