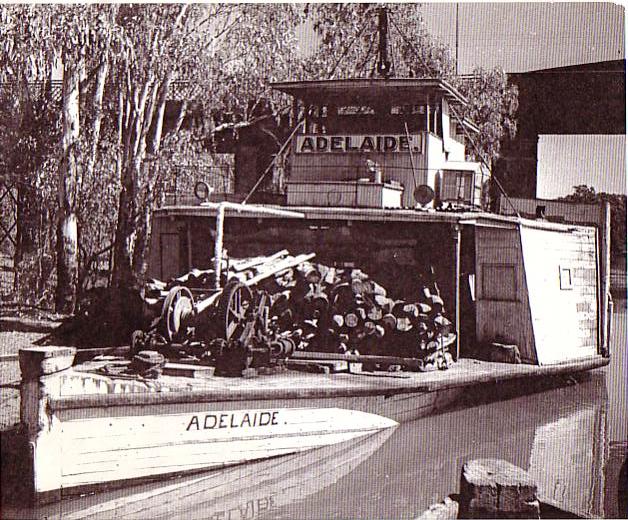 PS Adelaide is the oldest working wooden-hulled paddle steamer in the world residing in her birthplace of Echuca.

Built in 1866 by George Linklater, she was described as very strong and compactly built. For a boat her size she had a very powerful engine and large paddle wheels. She was named after the niece of one of the owners.
Her launch was witnessed by a large section of the population and she set sail for the lower reaches of the Murray River.
Unfortunately, the machinery proved not to be in “first-class order” and a few bends below Echuca she ran into the bank as the reversing gear was “very imperfect”. A branch hit the top housing knocking Captain Lewen down the stairs and he broke his leg.
In 1872 Adelaide returned to the “Top End” to work for Murray River Sawmills at a mill in the Banyula forest at Echuca East.   163 words

Bill Lubkey was a Forestry Foreman and he wrote of childhood memories of the PS Adelaide and her skipper Swan Anderson. ( so called because he raised a young swan which followed him around)
When Bill was about 4 years old he and his family lived in a timber cutters’ camp on the banks of the river about 40 miles from Echuca.
The Adelaide was coming down the river and as he ran to see her he fell into the fire and was badly burnt.
His mother flagged down the Adelaide and it took him to Echuca to the doctor. Later, Adelaide also brought him back home to the camp.
After that Swan Anderson never missed throwing out a bag of lollies he saw they camped by the river bank
Bill says he was a wonderful skipper and a good man.
In 1927, Bill joined the PS Murrumbidgee and barge JL Roberts and for five years travelled up and down the river carting sleepers and sawn timber to Echuca.  155 words

For 77 years, until 1949, the Adelaide towed 3 barges up to the forest twice a week. She left one at each loading area. Once loaded, the barges would be released to float downstream until Adelaide, on her way to port picked them up. A large chain dragged behind the barges would keep them to the centre of the river.

The Adelaide was eventually sold to a Renmark sawmill owner, leaving Echuca in 1858. By 1960 the Adelaide was for sale for £950.
The newly formed Echuca Historical Society was keen to buy her but lacking funds appealed the Echuca Apex Club for further financial assistance with the purchase.

Once back in Echuca, Adelaide lay at her moorings for 3 years until 1963. With a grant from the State Government, the boat was raised from the river by a cofferdam and with a series of earth banks filled with water, it was placed in the Hopwood Gardens. This placement caused angst among the local residents as it would take up part of the gardens.
In 1964 the Governor-General of Victoria, unveiled a plaque and the Apex Club handed the paddle steamer over the Mayor of Echuca.
She spent the next 20 years on dry land.
After extensive restoration, she was returned to the river and in 1985 Prince Charles & Princess Diana recommissioned her.
Adelaide’s 150th birthday in 2016 was celebrated with several “Sail Pasts” which with the occasional charter is now her workload. She can be found on view at the Echuca wharf where she is moored.

Hear an audio of this at www.echucahistoricalsoceity.org.au/video