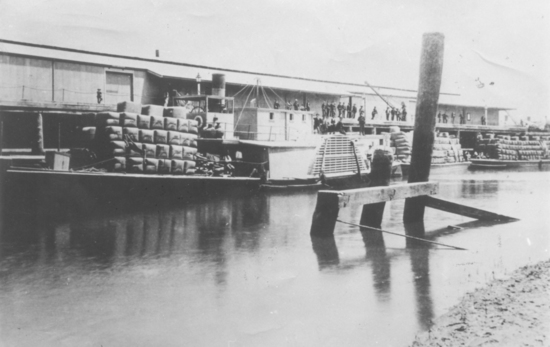 On a cold winter’s night in 1894 a large group of non- unionized shearers ( strike breakers or scabs) slept snugly on board the Rodney, which they boarded at Echuca wharf just minutes ahead of an angry mob of union shearers who were on strike for higher pay.

Anchored on the Darling River two miles above Moorara Station they were on their way to Toolarno Station near Menindee to break a bitter shearers strike.
Early on the morning of the 27th August the Rodney was boarded by 300 masked men, union shearers, intent on stopping the men reaching their destination.

They forced the crew and strike bearers ashore, and set fire to the Rodney, holding the captain until the boat was well alight, setting him loose on one of the barges he was towing and leaving Rodney to burn to her keel .
The Captain and the men were eventually marched to the unionist camp.

The Rodney was dragged to the river bank and left abandoned. Recently during the drought on the Darling River an archeology group found the wreck and photographed her.