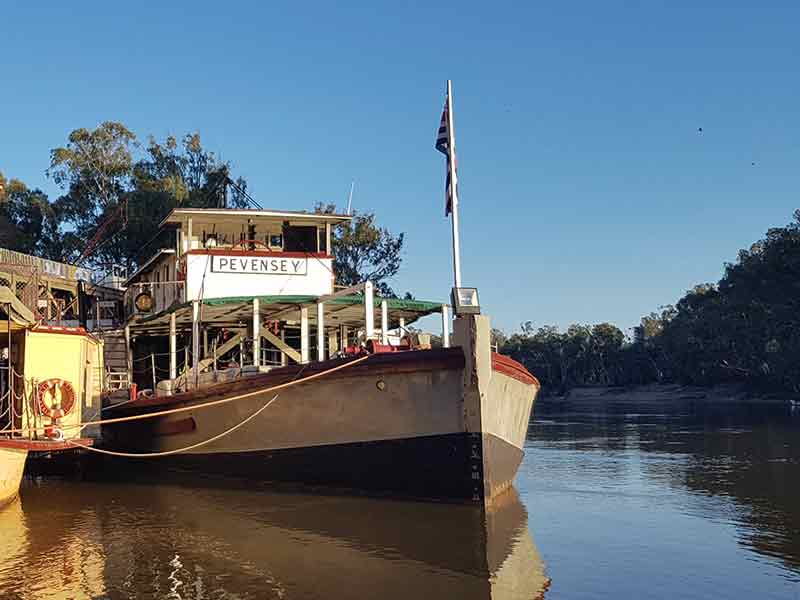 The boat designed by Peter Westergaard was one of the largest towing and cargo paddle steamers on the river and was known as the 'great Clydesdale' of the river and is named after a sheep property on the Murrumbidgee River called Pevensey Station.
She is 111.45 ft x 111.45 ft x 23 ft x 4.5 ft and is powered by its original steam engine, built by Marshall, Sons & Co. of England. It is a 20 h.p., two-cylinder steam engine No 55721. PS Pevensey could achieve speeds of 8 knots. The paddle steamer's construction is iron and timber. Her draft is 2 feet empty, 4 feet 6 inches when fully loaded, this is approximately 0.6 metres when empty and 1.35 metres when fully loaded. She still operates today in its cargo carrying layout
Pevensey collected bales of wool from sheep stations and brought them to the Echuca wharf to be forwarded onward for sale and on her return journey carried goods and produce for the stations along the rivers. Beneath the front and back decks there are large spaces called holds, in which the cargo is stored. The cargo can be piled so high that it is up to the wheelhouse. The Pevensey could carry 815 bales of wool and a total of 2000 bales when barges were towed along behind. The Pevensey’s barge was called Ada. A tow line (rope) is attached to the front of the barge and then tied to the tow post at the top of the paddlesteamer. This enables the barge to be towed along behind.
PS PEVENSEY remained operating on the river until 1958. When the river trade ended the Pevensey was tied up at Mildura. It was bought to Echuca to be restored in 1973. Repairing the boat was no easy task. Each piece of new timber for the hull was matched against the original then cut to shape using an adze – a technique used by boat builders for centuries.
Today the Pevensey is known to people all over the world for its role as “Philadelphia” in the Australian television mini-series ‘All the Rivers Run’, made in Echuca in 1982-1983. And works as a tourist boat at the Port of Echuca. The Pevensey is able to carry 100 people on each cruise, she is a registered Heritage Vessel