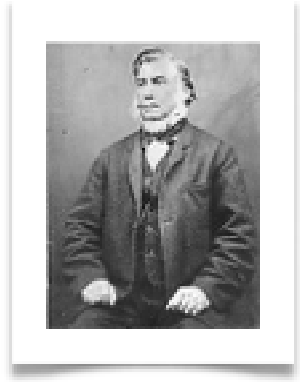 Henry Hopwood is widely regarded as the first settler and 'father' of Echuca.
In 1835 Hopwood was sentenced to 14 years and sent to Tasmania. Due to good behaviour he was given Ticket of Leave and became a policeman, but he mucked up by getting too friendly with his employer’s daughter and was sentenced to complete his time at Port Arthur after which he came via Melbourne to Echuca area.
He arrived on NSW bank of the Murray about 1849 and was employed at a boiling down works where, without official approval, he put in a punt and built a rough inn.
In 1853 Hopwood crossed to the Victorian bank of the Murray and gained a licence to occupy one square mile of land on the isthumus between the Murray and Campaspe Rivers. The site was well selected and later became the heart of Echuca.
In 1854 Hopwood put a 'punt of superior construction' – and later a pontoon bridge – across the Murray below his Bridge Hotel, correctly anticipating an increased movement of livestock.
The town became known as Hopwood’s Ferry.
Hopwood’s enterprise resulted in Echuca rapidly rising into prominence as a river town.
Businesses of many descriptions were opened and the streets were surveyed. In 1855 the first land sales were made.
In these early days, Echuca was supported mainly by the overland stock traffic, which in 1856 was valued at £250,000.
Hopwood died in 1869 and was quite well off.