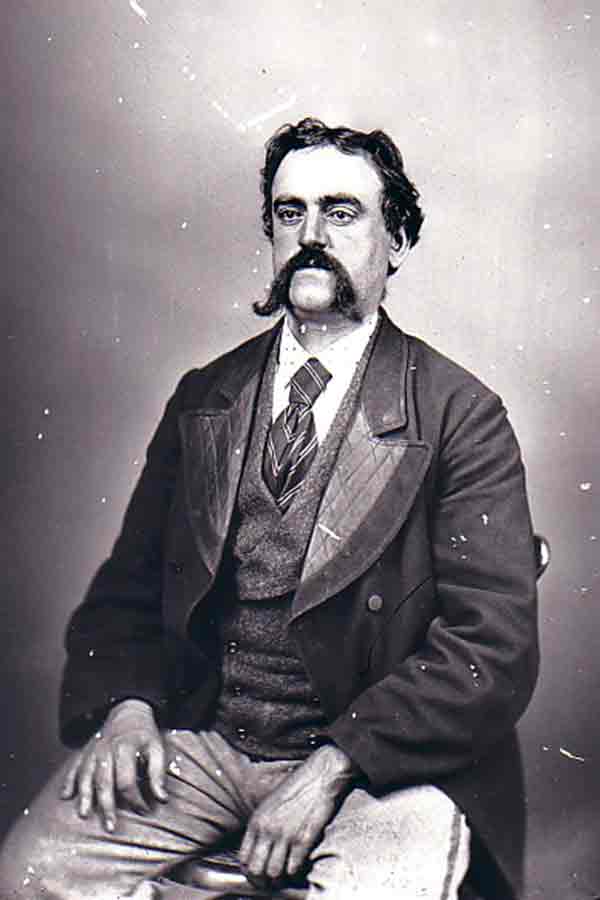 A larger than life character Augustus Baker Peirce was born in America to a seafaring family and by a round-about route arrived in Echuca in 1860. He jumped ship in Port Phillip Bay, tried the goldfields and later realised that the river was the place to be.

1863 he took a job with Captain John Egge at Wentworth. Later with an assistant acting as oarsman, he had an assignment to chart the Murray River from Albury to the Sea – recording all navigational features.

With the charting done, in 1864 he joined the Lady Daly and was soon promoted to skipper.

Gus Peirce married a Rutherglen girl, but his photography, painting, and entertaining as well being a paddle steamer skipper resulted in him travelling the length of the river. To earn some extra cash he began flogging patent medicines and was even rumoured to have conducted séances.
He was also a vaudeville performer, photographer and a travelling picture showman, touring his “Panorama” shows.

He often settled his drinks bill by painting murals on the hotel walls, the Steampacket at one time being completely decorated.
Two of his paintings of the 1870 flood are on display in the Echuca Museum.

He is also known to have owned a small paper in South Australia and a pub in North Melbourne.
He left Echuca and returned to America after the death of his wife in 1892.
At his farewell dinner in Echuca he said “I am pleased to say I came here with nothing and I am leaving owing thousands of pounds”.

Hear an audio of this at www.echucahistoricalsociety.org.au/video